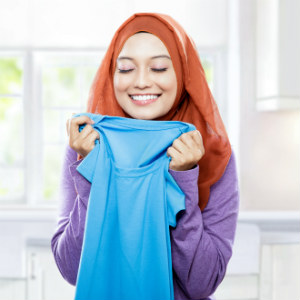 Like many people, when you smell a cleaning product you may wonder just what that smell is and how it affects your body. Here’s a quick run-down on what it all means.

All smells, pleasant or otherwise, exist because of substances which have evaporated into the air and then interact with the magnificent odour detector that is your nose.

Volatile organic compounds – what smells are

The first term you need to know about is “volatile organic compounds”. This phrase encompasses just about everything you can smell, from oranges and pine trees to hot tarmac and burnt toast.

Whatever the source of the smell, the molecules that evaporate off them are described as ‘volatile’. You can only smell that smell if that tree or tarmac releases the ‘volatile’ substances into the air so your nose can sense them.

Most volatile molecules have an odour, and most are ‘organic’, which just means they are molecules based on carbon atoms.

A compound is a combination of two or more chemical elements, so organic compounds are made up of carbon plus something else.

Thus we get ‘volatile organic compounds’, which are known by the inevitable abbreviation of VOCs.

Not everything is a smelly VOC

As always there are some exceptions to this general description. Some VOCs are odourless, and some smells don’t come from carbon molecules but from inorganic molecules like hydrogen sulphide. The latter includes the smell of rotten eggs.

Most familiar smells are combinations of compounds

Plants and trees release a fantastic array of molecules into the air – that’s why a walk in the woods or the garden can be such a pleasurable experience. Many other favourite scents and smells like roasting coffee, baking bread, fine wine and good whisky arise not from a handful of molecules but from subtle combinations of hundreds of them.

One of the most widely used scents in cleaning products is that of lemons, which is achieved using a VOC called limonene. It is obtained from citrus fruit rind. Limonene can react with ozone to create tiny amounts of a different compound, called formaldehyde. For more about this process, check out our guide to formaldehyde and how it affects the air in your home.

Where do VOCs come from in our homes?

Sources of VOCs in our homes include things like furniture, carpets, plastic flooring and linoleum, paint and varnish, adhesives, solvents, cosmetics and toiletries, as well as cleaning products and air fresheners

The smells in cleaning products

Most of the volatile substances that evaporate into the air when you use cleaning products and air fresheners are simply the perfumes.

Perfumes are combinations of mainly the exact same molecules that you smell in the garden, or the woods. Many come from essential oils extracted directly from plants, while some are ‘nature-identical’ molecules that can be manufactured more efficiently and sustainably. There are also some ‘new’ molecules, although these are often variants on naturally-occurring structures but with better characteristics.

It’s all about the right dose

Like anything else, volatile substances can be harmful given a high enough dose — whether they come from natural or “man-made” sources.

If you look at the individual substances that are released into the air when you bring flowers into the house or squeeze an orange, you’ll find some of those substances are both irritant and toxic.

What matters is the amounts of each substance that is breathed in; is it present at a levels that might cause harm?

Of course, having flowers in the home and peeling oranges is perfectly safe because the levels of VOCs released into the air that produce the scent are very low. The human nose is remarkable in its ability to detect extremely low quantities of substances.

Wide margins of safety to protect you

To ensure products don’t cause harm by releasing more than safe amounts of volatile substances into the air, cleaning product and perfume manufacturers assess the toxicity or irritant properties of the ingredients.

They calculate what levels might be in the air when using the product, and make sure there are wide margins of safety between the possible dose and one that could cause harm.

Because of growing awareness of the potential for substances in indoor air to cause harm, government scientists have reviewed the evidence, and this is kept this under review.

For example, scientists found good reason to be concerned about carbon monoxide, as well as nitrogen oxides from gas appliances, tobacco smoke, benzene from petrol fumes, and formaldehyde from chipboard. As a result, limits have been set for some of these.

Assessing VOCs in the home

When it comes to VOCs in our homes, the investigation concluded that “there is no evidence that current UK domestic exposures to VOCs, either as individual chemicals or as a total, pose a risk to health”.

A recent large EU research project has also reviewed the levels of substances found in indoor air. None of the substances for which they felt levels needed reducing come from use in cleaning products or air fresheners.

Myth: It doesn’t make much difference whether my laundry load is full or not

Fact: Only 49% of wash loads are fully loaded in Europe. If all loads were washed full, 715 million litres of water a day would be saved – the equivalent water used by 5 million people, or a city the size of Barcelona.

This website uses cookies to improve your experience while you navigate through the website. Out of these cookies, the cookies that are categorized as necessary are stored on your browser as they are essential for the working of basic functionalities of the website. We also use third-party cookies that help us analyze and understand how you use this website. These cookies will be stored in your browser only with your consent. You also have the option to opt-out of these cookies. But opting out of some of these cookies may have an effect on your browsing experience.
Necessary Always Enabled
Necessary cookies are absolutely essential for the website to function properly. This category only includes cookies that ensures basic functionalities and security features of the website. These cookies do not store any personal information.
Non-necessary
Any cookies that may not be particularly necessary for the website to function and is used specifically to collect user personal data via analytics, ads, other embedded contents are termed as non-necessary cookies. It is mandatory to procure user consent prior to running these cookies on your website.
SAVE & ACCEPT
MENU